The ten zombies are now finished.  They were all sprayed with antishine/dullcoat then a few highlights touched up and blue eyes added.  I may add some blood at a later date (but couldn't find my Tamiya clear red).  I'm not a fan of splashing blood all over minis, either real or paint, but small touches might look good.  The flesh eating zombie's lunch could do with some, and there a a couple of places where I want to cover up mistakes. 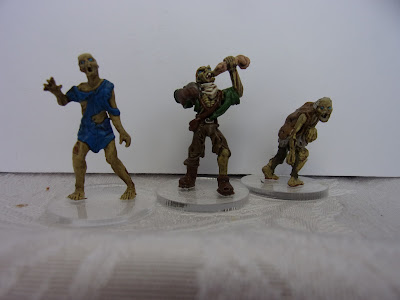 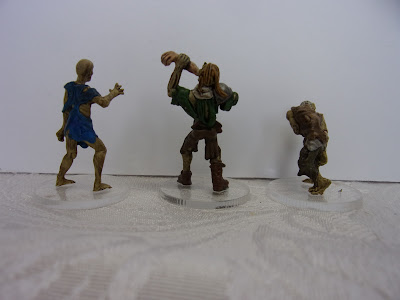 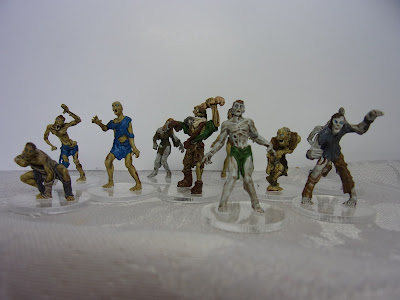 All ten zombies, though some seem a little camera shy

The bases are a new departure for me.  I have made my own flagstone bases for some time now, or painted onto plastic bases.  The clear basing has been discussed on several forums and I like it, it allows me to use the minis in many different games, which is a big thing for me now.  How much use can I get out of what I paint?  If it will work in several games it is more likely to get painted and used than if it only works in one (this might be why most of my Dreadball teams are still unpainted, and doesn't bode well for The Walking Dead, hmm).

Here are some comparisons with one of my earlier Bones skeletons. 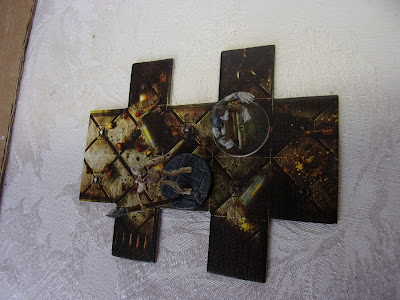 Dungeon Saga floor plans.  The artwork is impressive, with much detail, lost if the original bases are used.  I think I first saw clear bases suggested in relation to DS's forerunner, Dwarf King's Hold. 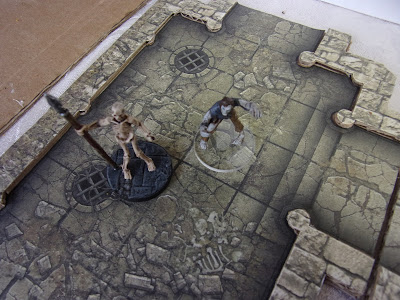 Dungeons and Dragons.  Here the artwork on one of Heroic Maps' sets really stands out for the zombie.  The skeleton looks O.K, but you certainly notice the base. 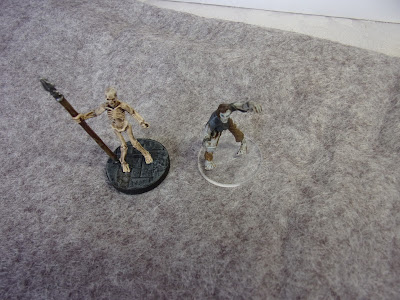 Frostgrave.  This is my Frostgrave mat, well it will be when I add some more texture.  Still, the zombie looks to be walking through the muddy snow.

I think the overall result is well worth it, but I'm not sure how many figures I will actually base like this.  Certainly my Kings of War armies will stay on their unit bases, and the 15mm Dragon Rampant stuff will also stay as is.
The basing requires careful removal of the original base; Next time I will try removing the base before painting, as some damage was inevitable.  The Bones are just glued on with superglue; I think if I were doing this with metal I would like to pin as well.
The bases are easily available on eBay, I got mine from Fluxlaserstudio, but there are other sellers
too.

Please leave comments about the new bases (and anything else for that matter).